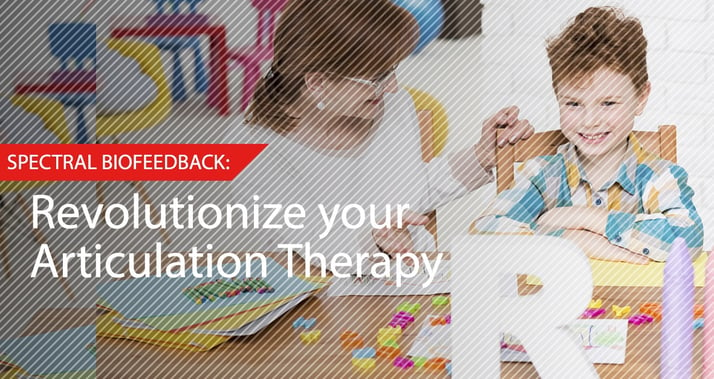 The author of this paper will be providing hands-on training on "Biofeedback for Speech Sound Errors" at the PENTAX booth #720 at this year's ASHA Convention. Click here to register to attend the micro-workshop. http://www.eventbrite.com/o/pentax-medical-learning-center-at-asha-2016-11926867720

Nine out of ten speech-language pathologists (SLPs) have treated clients whose speech sound errors did not respond to conventional treatment. Misarticulation of /r/ is one of the most difficult developmental speech errors to correct. This blog post discusses a study of eleven children with persistent /r/ misarticulation who receive traditional treatment followed by biofeedback therapy.

Spectral biofeedback is particularly useful in remediating pronunciation of the American English /r/, which produces a distinctive formant pattern on a spectrogram: the close spacing between the lowered third formant (F3) and the second formant (F2). This pattern can be seen clearly in a linear predictive coding (LPC) spectrum generated by the Sona-Match acoustic analysis software program.

In the following study, investigators hypothesized that the implementation of visual biofeedback would improve production accuracy of /r/ in children with residual speech errors following traditional treatment.

Eleven monolingual native English-speaking children ranging in age from 6 to 12 were enrolled. Each participant was randomly assigned to complete 4, 5, or 6 weeks of traditional articulatory intervention (learning the four components of correctly articulated /r/), followed by the same duration (4, 5, or 6 weeks, respectively) of visual biofeedback treatment using LPC spectra. Production accuracy was assessed by quantifying correct /r/ productions within treatment and probing /r/ in words at three time points (pre-, mid-, and post-test).

Participants received a total of 10 hours of individual treatment for /r/ misarticulation in two 30-minute sessions per week. After every five /r/ trials under both treatment conditions (traditional vs. biofeedback), the clinician provided knowledge-of-performance (KP) feedback to the child. Participants who produced either vocalic or consonantal /r/ with ≥80% accuracy within a treatment session were advanced to the next level of phonological complexity.

After 4-6 weeks of traditional treatment, a complementary duration of biofeedback therapy was initiated, at which point participants were introduced to the CSL Sona-Match software program. Sona-Match displays a real-time LPC spectrum of speech sounds that is visually simpler than a spectrogram. The program allows clinicians to load templates that display the correct pattern of formant heights for a specific sound. Once superimposed over the dynamic LPC spectrum of the participant's speech, the template serves as a guide that the participant tries to match by modifying his or her output. Each participant was provided with a template matched for his or her age, size, and sex to account for the effect of vocal tract size on formant heights.

In the first biofeedback session, participants familiarized themselves with the Sona-Match program by observing the formant patterns that arose from different sounds they produced. After a participant matched three vowel sounds successfully, the formant pattern for /r/ was introduced. When he or she could verbally describe the properties of the /r/ target in the LPC spectrum, biofeedback treatment was initiated.

As each biofeedback session began, clinicians provided encouragement and verbal cues ("try moving your tongue back") to the children to help them match their spectra to their respective templates. A total of 30 tokens of vocalic /r/ were then elicited in sets of five trials. Before each set, the clinician provided one verbal cue describing correct articulator placement for /r/; these cues corresponded to the four components of /r/ production that were trained during traditional intervention.

These study findings support the use of spectral biofeedback using Sona-Match technology to improve perceptual and acoustic /r/ production accuracy in children with /r/ misarticulation that is refractory to traditional treatment. Because traditional articulatory cues were incorporated into practice with the CSL Sona-Match, this intervention acts as a hybrid of traditional and biofeedback treatment rather than a pure form of biofeedback. More research is needed to determine the efficacy of biofeedback independent of prior or integrated traditional therapy.