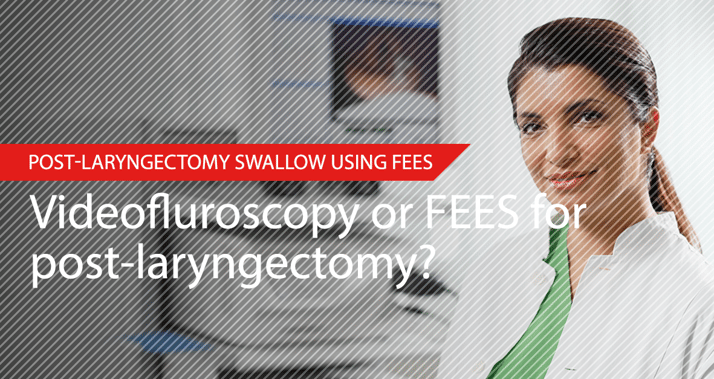 This study aims to compare the reliability and inter-instrument agreement of two techniques, namely videofluoroscopy (VF) and fiberoptic endoscopic evaluation of swallowing (FEES), used to identify and assess the degree of post-laryngectomy dysphagia.

A significant post-procedural complication, dysphagia after laryngectomy is often caused by stricture, fibrosis, or pseudodiverticulum.  The impaired bolus transport and regurgitation that result may negatively impact patients’ quality of life by way of compromised nutrition, prolonged meal times, and weight loss.

Because the risk of aspiration is relatively low in post-laryngectomy patients with dysphagia, data is limited with regards to accurately identifying dysphagia in this group and establishing optimal evaluation and management parameters for this cohort.

Thirty (30) laryngectomy patients were recruited from a large head and neck cancer center in the UK to undergo dysphagia evaluations using simultaneous VF and FEES. The VF unit was used to capture images at a rate of 30 frames per second. FEES was performed using a PENTAX FNL-10RBS flexible naso-endoscope; exams were recorded onto the Kay Pentax Swallow Work Station Model 7127e (PENTAX Medical, New Jersey, USA).

Each subject had four (4) trial swallows in each of four (4) consistencies. All trials were performed in both the lateral oblique position and the antero-posterior plane to ensure that all stages of swallowing were captured.

Three expert raters reviewed the evaluations using a 24-point consensus derived scale developed for this study. The scale assessed the presence and degree of residue in the neopharynx, voice prosthesis, and upper esophagus. Degree of residue was measured on a visual analogue scale ranging from minimal (00 mm) to severe (100 mm).

A greater degree of neopharyngeal residue was found with VF than with FEES, regardless of swallow consistency (P < 0.05).  The degree of voice prosthesis residue was similar for both tools on all consistencies, with the exception of thin liquids, for which FEES scored a higher degree of residue (P < 0.001). In terms of esophageal residue, both tools uncovered a similar degree for puree and soft consistencies, but FEES scored a greater degree for thin liquids and solids (P < 0.05).

The rating scale used in this study to measure expert raters’ judgement showed poor intra-rater reliability for FEES, along with poor inter-rater reliability for both VF and FEES. Bolus consistency was identified as a factor affecting rater agreement levels on FEES with lower agreement for thin liquid than for thick liquid. The study showed poor inter-instrument agreement for both modalities. There was a significant bias towards FEES scoring more positive findings (P < 0.001).

Post-laryngectomy dysphagia has been demonstrated in this study using videofluoroscopy and FEES. Study limitations include the lack of differentiation between “normal” and “abnormal” degree of residue, poor rater reliability in identifying both presence and degree of residue using the current rating scale, and the possible impact of swallow consistency on observer agreement. While VF and FEES may both be advantageous for evaluating post-laryngectomy dysphagia, further research is warranted to optimize the use of these and other tools for this purpose.