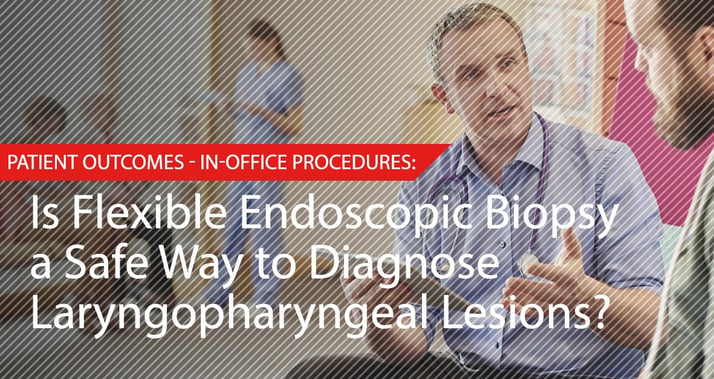 Owing to recent advances in transnasal endoscopy, flexible endoscopic biopsy (FEB) has become the diagnostic modality of choice for benign and malignant laryngopharyngeal lesions. The following study aims to examine the safety of this office-based procedure by evaluating complications following transnasal FEB.

Early diagnosis of laryngopharyngeal cancer is imperative; not only does it improve survival rates, but it also increases the chance of preserving laryngeal function. Traditionally, a biopsy performed under general anesthesia was necessary to make a histologic diagnosis. In the last decade, however, the advent of distal chip endoscopy has made office-based diagnoses possible with procedures such as flexible endoscopic biopsy (FEB).

Performed using topical anesthesia, transnasal FEB is reported to be a safe, feasible, and cost-effective modality that allows for digital image recording and reduces diagnostic delay. This study was conducted to assess the safety of FEB, a relatively novel procedure that, to date, has only been evaluated using small sample sizes.

This retrospective cohort study was conducted at a Dutch medical center from April 2012 to April 2016. A total of 201 flexible endoscopies were performed to diagnose benign or malignant laryngopharyngeal lesions in 187 patients (the largest cohort for FEB reported in the literature, to the authors’ knowledge). FEB was performed under topical anesthesia in an outpatient clinic.

A complication was defined as any deviation from normal post-FEB course. To minimize subjectivity, complications were stratified using the Clavien-Dindo classification of surgical complications.

In total, 561 biopsies were obtained, with an average of 2.8 biopsies per procedure. The most common biopsy site was the larynx (N=138; 68.7%). The two most common histologic diagnoses were squamous cell carcinoma (57.2%) and severe dysplasia or carcinoma in situ (21.4%). Only 3% of FEB procedures did not result in a tissue diagnosis.

In this study, only four complications occurred out of 201 FEB procedures (an incidence of 0.5% for each complication). These complications were systematically identified and classified according to a validated protocol, thus strengthening the results. This study’s findings are consistent with other research on this topic, which also demonstrates low complication rates for FEB when used to diagnose laryngopharyngeal lesions.

Of note, a compromised airway was deemed an absolute contraindication to FEB in this study. Anticoagulant use, in contrast, was not considered a contraindication to FEB, as it has been in prior literature. In fact, of the 29.9% of patients in this study who reported anticoagulant use, only one developed a complication, and it did not involve bleeding.

In-office flexible endoscopic biopsy is associated with low complication rates and is a safe technique for providing a histologic diagnosis for benign and malignant laryngopharyngeal lesions.