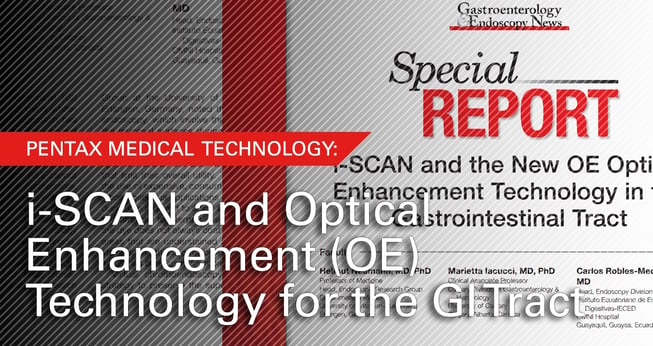 Below is a summary of the Gastroenterology & Endoscopy News Special Report on PENTAX Medical's OE Optical Enhancement Techology and i-SCAN technology. To download the full report, click here.

Conventional white-light endoscopy (WLE) is routinely utilized for endoscopic imaging of the GI tract. However, this technique is limited in its ability to fully characterize a lesion’s vascular patterns or to detect subtle inflammation. This can result in delayed or suboptimal treatment of conditions such as irritable bowel disease (IBD). Dye-based chromoendoscopy has been used to mitigate WLE’s drawbacks but has its own limitations, including the use of expensive dyes, uneven dye application, and prolonged procedural time.

Overview of i-SCAN and OE:

Over eight years ago, PENTAX Medical introduced i-SCAN, a technology that provides real-time image enhancement during endoscopic procedures. OE has since been developed to further improve the high-contrast imaging that i-SCAN generates. While i-SCAN uses only white light to illuminate structures, OE uses optical filters to create a continuous wavelength spectrum by connecting peaks of the hemoglobin absorption spectrum.

OE is a unique combination of digital and optical chromoendoscopy that highlights both surface pattern and vascular pattern morphology. Per one physician, the concomitant use of i-SCAN and OE provides “several multimodal platforms of electronic chromoendoscopy within the same equipment.”

Robles-Medranda et al. studied the ability of i-SCAN, OE, and Pentax Medical’s MagniView endoscopes to diagnose nonerosive reflux disease (NERD) by detecting pathognomonic minimal esophageal lesions (MEL) and intrapapillary capillary loops (IPCL). IPCLs were observed in 94.4% of patients with NERD and in 38% of control patients (P<0.05). OE plus MagniView was found to detect MEL and predict GERD with high sensitivity and accuracy when compared with the gold standard of pH-impedance measurement.

In a study comparing the utility of i-SCAN versus WLE in patients with ulcerative colitis, Iacucci et al. found a significant correlation (P<0.0001) between Mayo endoscopic subscores and overall high-definition mucosal and vascular patterns. The authors deduced that i-SCAN can detect lesions and subtle inflammation not otherwise detected via conventional WLE, suggesting that i-SCAN can better assess mucosal healing in these patients. Furthermore, i-SCAN was found to have a sensitivity of 100% and specificity of 83.3% in its detection of dysplastic lesions in patients with long-standing IBD.

i-SCAN and OE technology can be used to facilitate in-vivo diagnoses of conditions such as Barrett’s esophagus, celiac disease, and colorectal polyps. The use of additional testing, such as manometry and pH testing, may become unnecessary. Patients with IBD will receive targeted therapy, avoid unnecessary colon resections, and have fewer complications and hospitalizations.

The “resect and discard” policy introduced by the American Society for Gastrointestinal Endoscopy (ASGE) instructs that low-risk colorectal polyps should be discarded after resection rather than submitted for pathologic assessment. Through improved visualization of microvessels and lesion characterization, i-SCAN with OE will help clinicians implement this policy.

i-SCAN and OE can also be used to guide endoscopic resection of lesions in patients with IBD by providing a highly-defined characterization of a lesion’s margins and histology, potentially serving as organ-sparing therapy. Furthermore, i-SCAN and OE can be used to assess disease activity (mucosal healing) in patients with IBD, which will guide therapeutic management.

PENTAX Medical’s i-SCAN and OE systems have been shown to be superior to traditional WLE in the diagnosis of both upper and lower GI tract lesions, especially in patients with IBD. Further study of these technologies’ settings and design are warranted to establish standardized use to diagnose GI adenomas and malignancies.