EUS and ERCP are two common techniques used to diagnose and treat several pancreatobiliary conditions, such as hepatic malignancies, pancreatic cancer, chronic pancreatitis/pancreatic pseudocysts, and biliary strictures and stones. The following blog post outlines the advantages of using EUS over ERCP for the majority of these conditions. 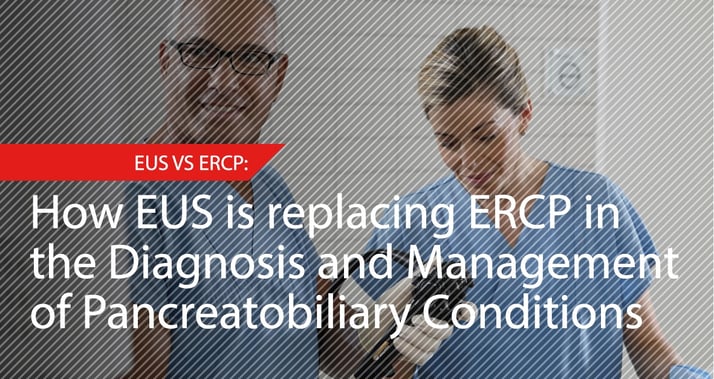 At centers where endoscopic ultrasound (EUS) is available, it is typically the modality of choice for the evaluation of pancreatobiliary tumors. Compared to endoscopic retrograde cholangiopancreatography (ERCP), EUS is less invasive and thought to be superior in terms of tumor detection, staging, and tissue sampling. Currently, the main center-specific barriers to the widespread use of EUS are simply lack of availability and expertise.

Several studies support the high sensitivity of EUS (80-90%) over ERCP (30-80%) when used to detect pancreatobiliary cancers whose presenting symptoms are bile duct obstruction and jaundice. In addition to malignancy diagnoses, EUS and ERCP are also used to detect bile duct stones. In a small, prospective, randomized, blinded trial done in Turkey in 2009, 120 patients with an intermediate probability of bile duct stones were studied. EUS was found to be more sensitive than ERCP (91% vs. 75%) and equally specific (100% for both modalities) for detecting stones.

A study launched in 2011 by the California Pacific Medical Center Research Institute was the first head-to-head comparison of EUS fine needle asperation (EUS-FNA) to ERCP in terms of diagnostic accuracy of suspected pancreatobiliary masses. The investigators hypothesized that EUS-FNA would be superior to ERCP when used for tissue sampling to diagnose pancreatobiliary tumors.

Fifty-one adult patients with painless jaundice who were being evaluated for pancreatobiliary malignancies were enrolled in this non-randomized trial. Each patient was assigned to receive one of two interventions: ERCP (brushing and biopsy) or EUS-FNA. Diagnostic yield from samples obtained was one of the study’s primary outcome measures. Although the study was completed in 2012, results have not yet been published.

According to Dr. Frank Gress, Professor of Medicine and Clinical Division Chief and Chief of Interventional Endoscopy in the Division of Digestive  and Liver Diseases at Columbia University Medical Center, therapeutic EUS  continues to be a quickly evolving field. Two notable areas where therapeutic applications of EUS has taken an important role  are EUS-guided celiac plexus blocks, which alleviate pain in >75% of pancreatic cancer patients and >60% in/chronic pancreatitis patients, and EUS-guided pancreatic pseudocyst and bile duct drainage. Dr. Gress also highlights the importance of EUS when used in conjunction with other new emerging technologies such as confocal laser endomicroscopy (CLE), which can detect pre-cancerous dysplasia at the cellular level and provide high-detail characterization of pancreatic cysts.

EUS can soon supplant ERCP as the gold standard technique for the diagnosis and treatment of several pancreatic and biliary conditions. Once published, results from Dr. Shah’s aforementioned study will hopefully support the investigators’ hypothesis that EUS is superior to ERCP when used to diagnose pancreatobiliary cancers. However, more studies are needed to guide gastroenterologists in the use of EUS over ERCP for malignancy diagnosis and for the management of other hepatic and pancreatic diseases.