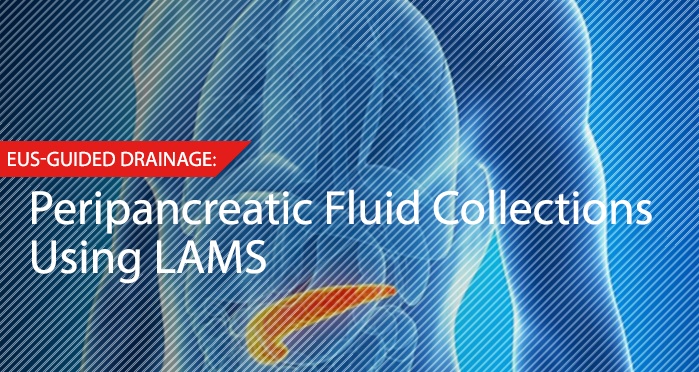 This editorial summarizes a recent retrospective, multicenter study that explores the use of lumen-apposing, fully-covered, self-expandable metal stents (LAMS) for EUS-guided drainage of peripancreatic fluid collections and necrosis. The objective of the study was to determine the long-term success rate of LAMS when used for this purpose.

Peripancreatic fluid collections (PFCs), which include both pancreatic pseudocysts (PP) and walled-off necrosis (WON), result from pancreatic ductal damage due to infectious, surgical, or traumatic etiologies. Though usually asymptomatic and self-limiting, PFCs that expand or become infected can have dire consequences, including biliary and gastric outlet obstruction and sepsis.

Symptomatic PFCs are often managed through surgical or percutaneous drainage, though these approaches are associated with high morbidity and mortality rates. Currently, EUS-guided drainage through placement of transmural stents is considered first-line treatment for symptomatic PFCs due to low adverse events and mortality rates, and high success rates. Furthermore, small European studies have shown LAMS to be safe and effective for endoscopic PFC drainage. The following study aims to evaluate LAMS in a larger sample size of patients from the United States.

Eighty-two (82) patients from four U.S. tertiary care centers were included in this study. All patients had undergone EUS-guided drainage with LAMS for symptomatic PFCs between February 2012 and June 2014. All PFCs developed after acute pancreatitis episodes; 14 patients had PPs, and 68 patients had WON.

The same LAMS brand (AXIOS) was used for each patient, who all underwent endoscopies performed by experienced clinicians using standard procedure. In this study, only the stent diameter (10 mm or 15 mm) varied at the discretion of the endoscopist, who tended to prefer the wider stent in patients with WON for its superior clearance of necrotic debris. Endoscopic necrosectomies were performed every three-seven days in patients with WON until resolution was achieved.

Abdominal CT scans were performed on all patients four to eight weeks after LAMS placement. Once complete cyst decompression was confirmed, stents were removed and patients were monitored in the outpatient setting for a median of three months for symptoms of PFC recurrence.

The primary outcome measure was “long-term success rate,” defined as complete resolution of both the pseudocyst and the patient’s symptoms without the need for repeat intervention at three months post-LAMS placement. Secondary outcome measures included technical success (successful placement of the transmural LAMS), number of adverse events, and PFC recurrence rates.

Technical success was achieved in nearly 98% of patients (80/82), and stent patency was maintained in 98.7% of patients (two stents spontaneously dislodged).

Fewer than 10% of patients (9.8%) experienced procedure-related adverse events; of these eight patients, six experienced self-limited bleeding, and two experienced maldeployment of the stent. One of the two patients with stent maldeployment required surgical repair for resultant gastric perforation, but recovered without complications after.

In this and other recent studies, EUS-guided PFC drainage with LAMS has been shown to have high rates of both technical and long-term success in patients with WON and PPs. These studies support the use of LAMS and EUS in the management of symptomatic PFCs and encourages the widespread implementation of this safe and effective technique as an alternative to the riskier surgical and percutaneous methods.