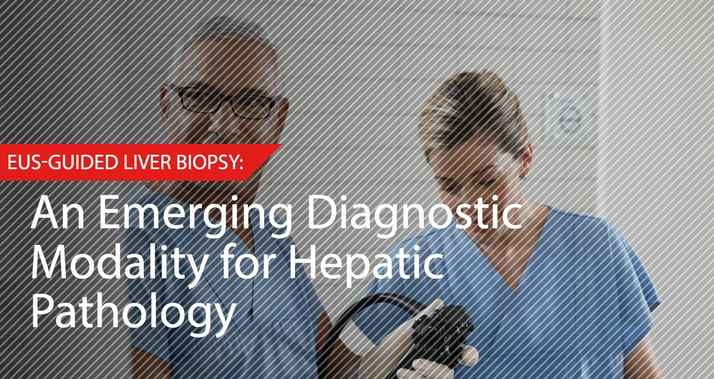 The gold standard for the diagnosis and staging of parenchymal liver disease is the collection of hepatic tissue via surgical, transjugular, or percutaneous biopsies. However, these methods carry limitations. Pain or bleeding at the biopsy site, sampling error (only one hepatic lobe is biopsied), and perforation of nearby organs are risks of “blind” percutaneous biopsies; transjugular biopsies can result in hepatic arteriovenous fistulas, neck hematomas, and intraperitoneal hemorrhage.

EUS-guided liver biopsy is a newer method of obtaining hepatic histology. When used in conjunction with Doppler ultrasound, key vessels and other structures are easily visualized and avoided, leading to fewer procedural complications than with more traditional techniques.

Support for the Efficacy of EUS-Guided Liver Biopsy:

In a 2009 study by Dewitt et al., 21 patients were referred for EUS-guided liver biopsies in the setting of suspected hepatic steatosis, jaundice in the absence of biliary duct obstruction, or chronic (>6 months) transaminitis of unclear etiology. Liver biopsies were obtained using a 19-gauge Quick-Core needle following Doppler examination. Over 90% (19/21) of the patients received a definitive diagnosis from the histology samples obtained, and there were no intra- or post-procedural complications reported.

Between July 2008 and July 2011, Stavros et al. studied 22 patients who underwent EUS-guided liver biopsy due to elevated LFTs in the absence of biliary obstruction. A definitive diagnosis was obtained via liver histology in 91% (20/22) of patients, there were no procedural complications, and the diagnostic yield  (median TSL 36.9mm; median CPTs 9) was found to be comparable to that produced via transjugular and percutaneous approaches. EUS-guided liver biopsy was also deemed cost-effective; while its cost of $1600 is almost twice that of a percutaneous biopsy, only EUS allows for simultaneous testing with procedures such as EGD or banding, making costs difficult to compare.

Diehl et al. studied 110 patients across eight centers who underwent EUS-guided liver biopsy from November 2011 to September 2013. 98% (108/110) of patients produced specimens adequate for diagnosis, and only one patient, who was thrombocytopenic and coagulopathic before the procedure, experienced a complication (pericapsular hematoma). The authors purported that EUS-guided liver biopsy’s low procedural complication rate combined with its high diagnostic yield deem it the preferred method of hepatic histological sample collection.

One 2013 study by Gor et al. of 10 patients found histological samples obtained via EUS-guided liver biopsy to be comparable to those obtained via percutaneous or transjugular route in terms of average TSL, average number of CPTs, and diagnostic accuracy. A 19-gauge non-Tru-Cut needle was used, but given the small sample size, more studies are needed to determine the needle of choice for this procedure.