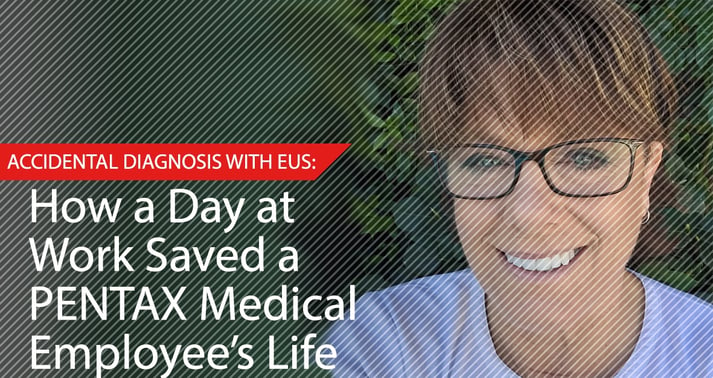 In May 2015, Denise Wallace, Regional Service Manager at PENTAX Medical showed up to help demonstrate products in the company’s booth at the annual Digestive Disease Week conference in Washington, DC. The workday started with
Denise helping her colleague, Corinne Thietten, set-up the endoscopic ultrasound (EUS) product display in advance of the exhibition.

PENTAX Medical's EUS endoscope is designed to help in tumor staging and to visualize the lining and walls and nearby organs in the digestive tract. So when Corinne used the EUS probe to take an image of Denise’s neck to test that an image could be rendered on the monitor, Corinne noticed a mass. Corinne printed an image of what she saw and told Denise to get checked by a doctor right away.

Because of her work with PENTAX Medical, Denise knew that a mass on what looked like her thyroid was nothing to make light of, and made the appointment. Her doctor ran some blood tests, which came back normal. Any other patient might then have assumed all was well and not would pursue further diagnosis. But Denise had been experiencing symptoms, including difficulty swallowing and sleeping too much, that she had been writing off as minor issues. Those symptoms, coupled with the image Corinne had taken, led to an endocrinologist appointment, an MRI, a fine needle biopsy, and a follicular cancer diagnosis in rapid succession. From there, Denise underwent radiation, followed by surgery to remove the tumor.

Denise’s story has a happy ending, both because she landed in the right place at the right time for her cancer to be discovered and because of the good prognosis for follicular cancer patients. About 15 percent of all thyroid cancer cases are follicular cancer, making it the second most common type of thyroid cancer, behind papillary thyroid cancer. It is more common in women than men by a 3:1 ratio. The prognosis of follicular cancer is directly related to the size of the tumor, and metastases to lymph nodes as well as distant metastases to other organs is uncommon. For younger patients (peak onset is between ages 40 and 60) with smaller lesions, the overall cure rate is around 95 percent.

Denise’s tumor was not small—it was between three and four centimeters. She had ignored her symptoms for two years. Her thyroid tests came back showing that she was healthy. All these were cards stacked against her. Denise believes it was only the fact that she happened to get the EUS image to take to her physician that swayed her luck in the other direction.

The lesson, for Denise, is to follow your gut instincts as a patient when you feel that something is not right with your health, and to push for additional tests, get second and third opinions, and not to be satisfied after your first doctor visit or test if you are still feeling unwell. “Thyroid cancer is one of the most treatable types of cancers,” Denise says. “There’s no reason to die from this. But I had been to the doctor several times and all my bloodwork came back fine. It was Corinne’s expertise and that EUS image that saved my life.”