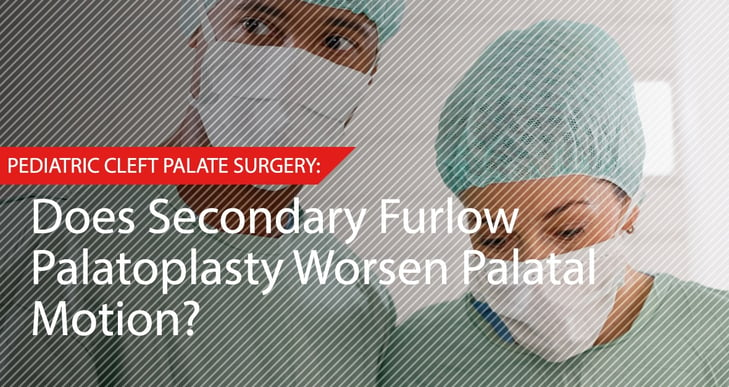 A widely-accepted technique for primary cleft palate repairs, Furlow palatoplasty is also used for secondary repairs to treat complications such as fistula development or persistent velopharyngeal insufficiency (VPI). However, due to its potential to misalign and scar soft palate musculature, concerns have been raised that secondary Furlow palatoplasty (following a successful primary palatoplasty) can have harmful effects on palatal motion.

For this retrospective case series, medical records were obtained from patients in an urban tertiary pediatric otolaryngology practice who had undergone either primary or secondary Furlow palatoplasty over a four-year period. Subjects were randomized to one of two groups, and two blinded reviewers assessed soft palate motion as was recorded on postoperative nasopharyngoscopy videos.

The primary outcome measure was the mean palatal motion score for each subject (composite score range, 0-2), generated using a modified Golding-Kushner scale to assess velopharyngeal function. Two subunits, namely the right and left hemisoft palate, were examined; the score for each subunit ranged from 0 (no motion) to 1 (normal motion to the midline). The study was powered to detect a 25% difference in mean palatal motion scores between the two groups.

These results align with those of other recent studies. Although double-opposing Z-plasty repair was first introduced as a means for performing primary palatoplasty, multiple studies have subsequently demonstrated the procedure’s efficacy when used for secondary, or revision, repair. Following secondary Furlow procedures, patients were found to have either unchanged or improved velopharyngeal competence and/or speech intelligibility.

This study had several limitations. Due to small sample size, the study was insufficiently powered to uncover minor differences in palatal function. The Golding-Kushner scale used to measure outcomes is both subjective and associated with inter-rater variability. Finally, the postoperative clinical status of each patient was not fully evaluated.

Studies with larger sample sizes are needed to detect smaller differences in palatal motion and function between the primary and secondary groups. Future studies could also use speech analyses and quality-of-life surveys as tools to provide a more thorough assessment of post-palatoplasty clinical outcomes.