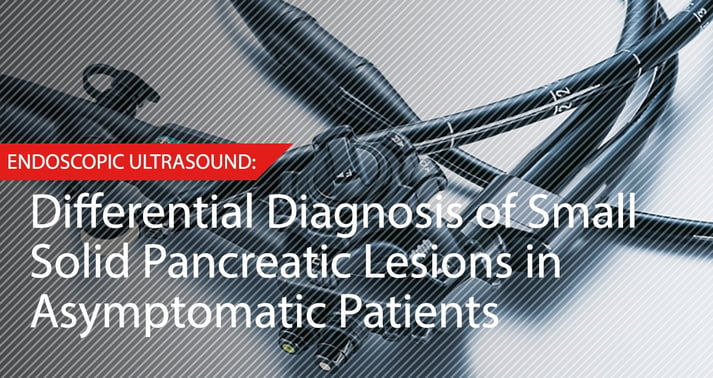 Pancreatic ductal adenocarcinoma (PDAC), the most common primary malignancy of the pancreas, is diagnosed late in 80-95% of cases. By this time, patients already have locally advanced or metastatic disease, which portends a dismal prognosis. Notably, little is known about early-stage PDAC, which is typically an incidental finding. This blog post summarizes a study of nearly 400 patients with small solid pancreatic lesions (<15 mm) to determine the etiology of these lesions and optimize clinical management.

The overall five-year survival rate for patients with PDAC is poor, ranging from <5% to 23%. Because early detection and curative resection of malignant lesions is paramount to improving prognosis, it is crucial to differentiate PDAC from non-PDAC before radical surgery is performed. Currently, EUS-FNA is the gold standard for the diagnosis of small, solid pancreatic lesions, which are presumed to be PDAC unless determined otherwise.

Over a period of 10 years, a retrospective study analysis was performed on 394 patients from several centers. These patients were (incidentally) found to have small, solid pancreatic lesions of unclear etiology. Patients’ ages ranged from18-100 years old (median age 61); 236 of these volunteers were female and 158  were male. These patients were all either asymptomatic or experiencing nonspecific symptoms at the time their lesions were detected using transabdominal US, EUS, CT, or MRI. A total of 219 patients underwent either contrast-enhanced US or contrast-enhanced EUS.

Final cytological or histological diagnoses were made via imaging-guided biopsy and/or surgical techniques. If lesions were found to be benign, a follow-up diagnosis was made 12 months later.

The majority (58%) of all small, solid pancreatic lesions were localized to the head of the pancreas, with 67% of all malignant lesions and 73% of all PDAC lesions being localized to this area.

Fewer than 40% of patients with small, solid pancreatic lesions (<15 mm) were identified as having early-stage PDAC. Nearly 60% of small, solid pancreatic lesions were preoperatively diagnosed as non-PDAC, thus sparing patients unnecessary surgical removal and its associated morbidity and mortality. Although CT scan is still widely used for the diagnosis and staging of pancreatic cancer, the use of contrast-enhanced US or EUS as highly sensitive, first-line methods for the detection and characterization of PDAC is showing to be much more effective.

The five-year survival rate of PDAC is contingent upon the detection of small tumors at an early stage, and can exceed 75% after the resection of small (<15 mm) lesions. To ensure that only malignant lesions are resected, contrast-enhanced EUS or US can be used to differentiate PDAC from non-PDAC based on specific enhancement patterns. In this instance, patients with hypovascular lesions (PDAC) should be referred for surgical resection, while patients with isovascular or hypervascular lesions (non-PDAC) should undergo diagnostic biopsy to determine if surgical resection is necessary. PENTAX Medical offers the EG-3870UTK linear EUS gastroscope when performing EUS-guided FNA.